MASVINGO – Traditional leaders are according to Shona culture role models but this does not seem true with Headman Masasire of Bikita whose young girlfriend has created problems in the family by assaulting his 72-year-old wife.

Mbuya Leocadia Kereke was eventually forced to ditch her matrimonial home because of the assaults and had to live with her children from one to another.

Further Jane also assaults Headman Masasire himself from time to time, according to court papers in the hands of The Mirror.

Despite the violence, Kereke who has 15 children from different women has gone on to trash his 56-year-old marriage to his wife Mbuya Kereke, describing it as chimuchato chemaRoma (the useless Catholic marriage).

Mbuya Kereke and Kereke were married at the Roman Catholic run Silveira Mission in 1966.

The matter which has caused divisions in the family and tainted the Masasire Headmanship spilled into the courts and Magistrate Mutema, in November 2020 issued an order for the eviction of Jane out of the Kereke homestead.

The order was sought by Mbuya Kereke.

However, Kereke and Jane last week approached the High Court in Masvingo in a bid to overturn the eviction order. Jane was staying at the Kereke homestead since 2019.

The court documents indicate that Mbuya Kereke looked after all of Kereke’s 15 children including those that he sired with other women.

The basis of Kereke’s argument at the courts is that Mbuya Kereke has no right to evict another woman from Kereke’s homestead.

Mbuya Kereke through her lawyer Joel Mambara of Mambara and Associates argued that she has the right to instigate an eviction order on the basis that she is trying to preserve her marriage and matrimonial home.

She also said that she does not mind if Kereke and Musindo go and stay at another place.

“The family has been divided by this and siblings are no longer seeing eye to eye because of this,” said Mambara in court.

Musindo and Kereke are arguing that the eviction order should be nullified because Mbuya Kereke does not own the Kereke homestead and has no right to chase away Musindo who is staying with Kereke’s consent.

The court also heard that Kereke had another adulterous affair with a woman only identified as Stella with the consent of Mbuya Kereke in 2011.https://masvingomirror.com 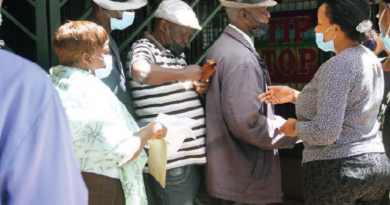