Our fathers called them VaTsangadzi, meaning; “my own blood sister.” Vatete mai Stern turned 97 on 2nd January 2021. Her children threw a surprise birthday party for her in uptown Norton. I attended it.
I was thrilled.

Vatete mai Stern is the epitome of African motherhood, tall, dark, pretty, graceful and gracious. At ninety seven years of existence, she’s seen it all, but still going strong. She walks unaided by man or stick, and giggles girlishly at the sight of her relatives; “I see you Sinamano, eaters of the Mutohwe fruit whose food is scratched from rich fertile soils by Hwari the
bird.”

And she ululates, downloading the blessings of them above on us mere mortals, uniting the departed and the living with
spiritual force. She married into the Makara family, and bore several offspring, Pondai the soldier, Phillip the farmer, Langton with the uproarious laughter, Sam the technician, Daisy the dazzling dame, Maokomavi the medicine man, among others. Children of the Hungwe clan. “Those that break wind noisily.

Those that mount until dawn”.

And on 2 January 2021, remnants of the Sinamano clan descended on Norton to celebrate the life of Vatete Mai Stern, the link between the dear departed and the desperate living, a rare moment of joy.

And so we drank. Whilst Vatete mai Stern wept with joy. https://masvingomirror.com

Son murders father for asking him to help in the fields 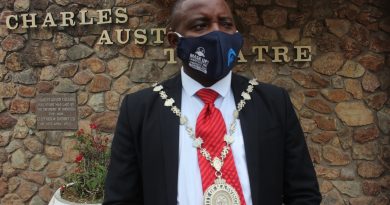