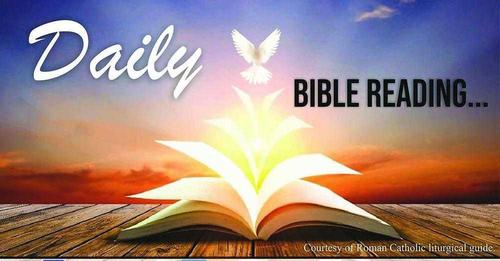 Brethren: I bow my knees before the Father, from whom every family in heaven and on earth is named, that according to the riches of his glory he may grant you to be strengthened with might through his Spirit in the inner man, and that Christ may dwell in your hearts through faith; that you, being rooted and grounded in love, may have power to comprehend with all the saints what is the breadth and length and height and depth, and to know the love of Christ which surpasses knowledge, that you may be filled with all the fullness of God. Now to him who by the power at work within us is able to do far more abundantly than all that we ask or think, to him be glory in the Church and in Christ Jesus to all generations, for ever and ever. Amen.

Ring out your joy to the Lord,
O you just; for praise is fitting for the upright.
Give thanks to the Lord upon the harp;
with a ten-stringed lute sing him songs. R/.

For the word of the Lord is faithful,
and all his works to be trusted.
The Lord loves justice and right,
and his merciful love fills the earth. R/.

The designs of the Lord stand forever,
the plans of his heart from age to age.
Blessed the nation whose God is the Lord,
the people he has chosen as his heritage. R/.

Yes, the Lord’s eyes are on
those who fear him,
who hope in his merciful love,
to rescue their souls from death,
to keep them alive in famine. R/.

Alleluia.
I count everything as refuse, in order that I may gain Christ and be found in him.
Alleluia.

At that time: Jesus said to his disciples, “I came to cast fire upon the earth; and would that it were already kindled! I have a baptism to be baptised with; and how I am constrained until it is accomplished! Do you think that I have come to give peace on earth? No, I tell you, but rather division; for henceforth in one house there will be five divided, three against two and two against three; they will be divided, father against son and son against father, mother against daughter and daughter against her mother, mother-in-law against her daughter-in-law and daughter-in-law against her mother-in-law.”

The Gospel of the Lord.
GOSPEL REFLECTION: Peace on Earth?
October 20, 2022

Yes, this is a shocking Scripture at first. Why would Jesus say that He came to establish not peace but division? This does not at all sound like something He would say. And then to go on saying that family members will be divided against each other is even more confusing. So what is this about?

This passage reveals one of the unintended but permitted effects of the Gospel. Sometimes the Gospel brings about a certain disunity. Throughout history, for example, Christians have been severely persecuted for their faith. The example of many martyrs reveals that those who live the faith and preach it may become the target of another.

In our world today, there are Christians who are persecuted simply for being Christian. And in some cultures, Christians are severely mistreated for speaking out regarding certain moral truths of the faith. As a result, the proclamation of the Gospel can at times bring about a certain disunity.

But the real cause of any disunity is the refusal on the part of some to accept the truth. Do not be afraid of holding fast to the truths of our faith regardless of the reactions of others. If you are hated or mistreated as a result, do not let yourself give in to compromise for the sake of “peace at all costs.” That form of peace is not from God and will never bring about true unity in Christ.

Reflect, today, upon whether or not you struggle with compromising your faith when it is challenged by others. Know that God wants you to choose Him and His holy will above every other relationship in life.

PRAYER:
Lord, give me grace to keep my eyes on You and Your will and to choose You above everything else in life. When my faith is challenged, give me courage and strength to stay strong in Your love. Jesus, I trust in You. 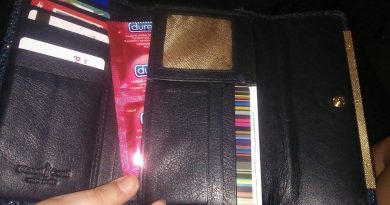 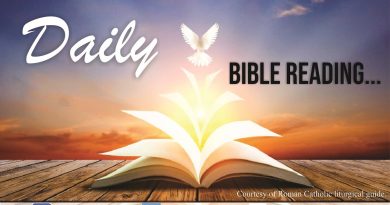