As the curtains slowly comes down on Women’s History Month for the current year, it would be remiss of me if I didnt salute the amazing ladies who are holding their own in the extractive sector, which used to have a reputation for being one of the most male dominated industries.

Through tenacity and boldness, Zimbabwe has refused to be left behind in the global push to achieve gender parity in the resource sector, although a lot still needs to be done, if the statistics are anything to go by.

Women are still outnumbered by men in mining, with only 10% of Zimbabwe’s 535,000 artisanal and small-scale miners being women. Overall, it is estimated that women account for about 30% to 40% of the workforce in the industry, with their participation at managerial levels more or less reflecting a similar trend.

In the past, the industry was less attractive and intimidating to the fairer sex because of its technical nature as well as the hostile and unsafe conditions at the mine-site level. Change-makers have, however, been tackling the bull by the horns and defying assumptions that used to scare off even the most brave and competent of women.

Today, the industry has had shining examples of women who have shattered the glass ceiling thus becoming an inspiration to the girl child. In this four part series of write-ups, today I would like to focus on arguably the Woman of the Moment in the extractive sector who is none other than my good friend, the current president of the Chamber of Mines of Zimbabwe (CoMZ), Ms Elizabeth Nerwande, aka “Ms Liz.”

This is no mean feat considering the significance of the mining industry to Zimbabwe’s economic fortunes. The sector contributes about 16% to gross domestic product (GDP) and 60% of the country’s foreign currency receipts. In 2020, the industry set a target of generating US$12 billion revenues by 2023 from as little as US$2,7 billion in 2017 as articulated by the Minister of Mines Honourable Chitando.

Projections are that the sector could surpass agriculture which currently contributes 17% to GDP.Ever since its formation as a private sector voluntary organisation in 1939, the CoMZ has had only two female presidents, namely Ms Ella Muchemwa – a geologist who assumed the title when she was still an executive at RioZim between January 2016 and March 2017 – and Ms Liz.Both ladies are phenomenal at their craft.

Ms Nerwande, for instance, demonstrated her dynamism by ascending to the top echelons of both the CoMZ and Mimosa Mining Company – where she is the Head of Corporate Affairs – despite the fact that she didn’t have the technical background when she switched to mining a few years ago, although she had learnt quite a lot about the extractive sector while consulting for some of the country’s leading mining houses.

She has since transformed herself into an expert of note in mining matters. “The Iron Lady of mining”, has also passionately worked towards the economic prosperity of all Zimbabweans, regardless of their gender, while also uplifting w o m e n w h o a r e s t i l l b u r d e n e d b y t h e disproportionate costs of mining, through various corporate social responsibility initiatives.

After succeeding Mr Batsirai Manhando at helm of CoMZ, Ms Nerwande has not disappointed. She has ensured that the Chamber remains relevant and on course to achieve its vision of being the engine for growth and a high profile lobby group whose energy is focused in the key areas that make a difference to the economy and the industry. The chamber has therefore been proactive in pushing for improved operating conditions and has been collaborating with other stakeholders in driving the growth of the industry and the economy.

For these and other reasons, she will be seeing out her second and final term at the helm of the membership-driven lobby and advocacy group in May this year having achieved many accomplishments. Among her many achievements being the transformation of the Chamber into an institution that offers real, tangible benefits to its members.

Her signature achievement is perhaps the establishment of a resource centre at the CoMZ that seeks to ensure that miners have
access to information at the click of a button.

Before her election in July 2019, Ms Nerwande was the first vice president of the Chamber. She had long broken into the corporate world as the executive director of the Consumer Council of Zimbabwe from 1999 to 2003, where she laid the foundation for the Consumer Protection Act, which was assented into law in December 2019.In 2004, she was appointed as chief executive officer for the country’s export promotion agency, ZimTrade, a position she held until 2006. At one point, she was the Commissioner General for an Expo in Aichi Japan.

She is also the founder of Tayana, a corporate branding company that focuses on personal and corporate image branding and management, driven by the philosophy that says healthy individuals make for happier employee

Ms Nerwande’s success is partly a result of lessons learnt in her formative years from her guardian angels: her grandmother, who was a hardworking master farmer in her own right and her aunt who took her time to mother her.She is on record saying women have really never clamoured for special treatment in the workplace, but rather for recognition based on their strengths and expertise.

To continuously scale up the ladder, she places a lot of emphasis on collaborations and integration as opposed to competition, saying
through engagements, there is need to acknowledge the various benefits that women can bring to the workplace while giving them space to excel.

To win in an increasingly competitive workplace and business environment, she is adamant that it is imperative to go beyond
gender and take time in building the required competences. “As women, we must organise ourselves better and deliver. We must realise that ours is a shared journey for a better future and as such unity of purpose in this journey is a must,” Ms Nerwande has been quoted as saying.

The environment cause was not lost on Liz as she thrust herself to the deep end of the regreening of our country. When Mimosa made the decision to participate in the establishment of tree seedling nurseries, it was Liz who became the implementer in-chief helping set up the Mtshingwe Primary School tree seedling nursery making it the first steel structure project that we had. More than that, Liz would run with the project of establishing orchards at the homesteads of kraal heads within rural Zvishavane.

With such inspiring woman icons like Ms Liz, we should see more women breaking barriers and raising the bar to another level in the mining sector where the likes of Ms Henrietta Rushwaya of the Zimbabwe Miners Federation, Mrs Busi Chindove (Head of Corporate affairs at Zimplats) and Ms Clara Sadomba (General Manager – Marketing and Administration at Zimasco), all of whom have shown us that gender bias has no place in today’s world even in male enclaves such as mining. https://masvingomirror.com 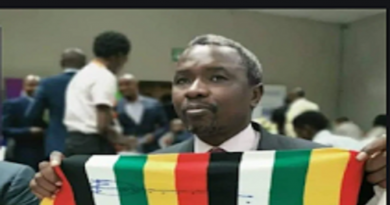 Wild partying as Tagwirei takes over gold mine