“THE HAPPIEST MAN THAT EVER LIVED”

Biggie Nzira’s life was full of calamities. Everything he touched backfired.

But he always laughed off his blunders with sincere good humour.

l don’t know whether trouble followed him, or whether he is the one who sought after it.

Once when he was broke, he sold me a rakish cap of thick designer cloth, the likes of which were worn by reggae superstars.

I paid him $2 for it and he rejoiced. Straight to Mudhara Svoba’s counter he went, and there bought opaque liquor for everyone present, including myself.

As usual he bragged and boasted and joked about his own resourcefulness and his vast fortune, while we drank from the deep coffers of the generous man whose wealth was limitless.

But we all knew the source.

Next morning, he was at the doorstep of my bedroom, demanding his cap back.

“Yes you paid me, but I
didn’t expect my
mother to find out l
sold the cap”

he responded with unbelievable sincerity.

I refused to hand back the cap without having first received my refund, which he brought three days later, and the transaction was reversed.

Biggie Nzira went away for some time and he came back with a builder’s certificate. Again he boasted about his newly acquired skill to anyone who bothered to listen.

And so the liqour flowed, our own Biggie had made it into the big league.

During such drinking sprees, Biggie would be heard singing

Stern Kandhlera was a ruthless man with a bad temper. lt was a grave error to be on the wrong side of Stern Kandhlera. He fought, he avenged, he got even.

Stern Kandhlera was building a two roomed house at his homestead, and Biggie Nzira went there to offer his services.

A deal was concluded, construction started. Biggie Nzira was showcasing his skills!

ln a few days’ time, the structure was complete. Biggie Nzira received his payment from Stern Kandhlera and crossed Mutorahuku stream with his loot, straight to Mudhara Svoba’s counter he proceeded, to thereat douse the fiery thirst that is always found in a construction job.

Everyone at Mudhara Svoba’s counter cheered his arrival, for in the village, news about who had earned money travelled fast.

The drinking started in earnest, and a song about the exploits of Biggie Nzira could be heard from afar;

Meanwhile, Stern Kandhlera remained behind taking a bath in readiness to visit Mudhara Svoba’s counter to quench his thirst from the frothing mugs of Chibuku beer.

From his bathroom, a loud deafening noise erupted from the newly constructed structure. He dressed hastily and walked out to investigate.

Stern Kandhlera could not believe his eyes.

The praise singers of Biggie Nzira at Mudhara Svoba’s counter saw Stern Kandhlera approaching, his fury matched only by his haste.

Biggie Nzira was throttled and shaken, the way a dog kills a rabbit.

“l will pay you back
Stern”

For such was the daily life of Biggie Nzira, the happiest man that ever lived! https://masvingomirror.com 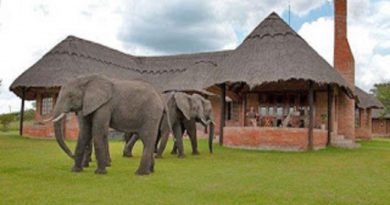 Pride of lions cause lockdown in Chipinge