GUTU – Forty-five students have graduated from Masvingo Urban Vocational Training Centre (MUVTC) in Chiwara, Gutu after completing year-long courses in crop and farming production, brick and block laying and milling.
The graduants were presented with certificates at a recent ceremony held at the vocational training.

The programs are offered by MUVTC in partnership with the Organisation of Collective Cooperatives in Zimbabwe (OCCZIM). Liechtenstein Development Service (LED) funded the programmes.

The ceremony was attended by the Southern Africa representative for LED, Elizabeth Atzinger and heads of Government departments.

“We will continue to sponsor the program because it is increasing production”, said Atzinger.

MUVTC is one of the 43 vocational training centres that fall under the Ministry of Youth, Sports, Arts and Recreation that started on January 17, 2 000. Over 6 000 graduates have passed through the doors of the Centre.

“The graduants should go and implement skills and value addition to meet vision 2030 proposed by Government,” said Pauline Karigambe who is the director of Vocational and Skills Development.

Brick and Block Laying graduants graduated in absentia since they are already contracted to build Makwirivindi Clinic.

“I’m happy to announce that our Brick and Block Layers students have already been contracted to build a local clinic. This is pleasing as it shows that our institute is also playing a role in national development and growth”, Petros Makumbe, the programs manager told The Mirror. https://masvingomirror.com 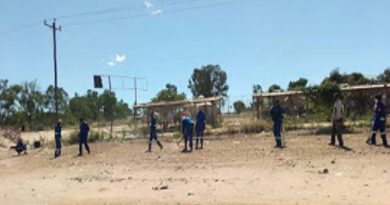